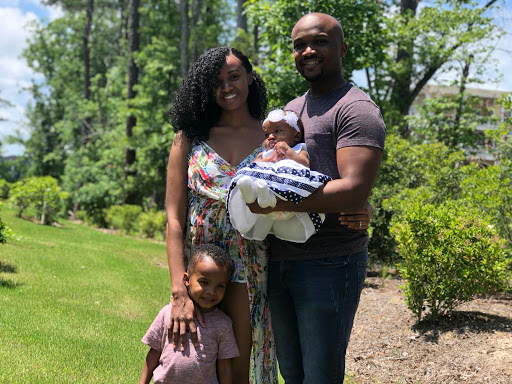 I’m super hungry.  I just want a huge burger!” DJ, my mom, and my aunt subsequently accompanied me to a restaurant after leaving the doctor’s office late that morning.  I had been in early labor since 4 AM, and my contractions were getting stronger and closer together.  So, after calling my midwife, and being told to come in for an exam, they determined that I was 4 cm dilated.  Once they gave me the okay to go home, on the condition that I would return when things started picking up, all I could think about was food!  Funny enough, there was no thought of the pain I was supposed to be in, even though I was having frequent contractions.  And while at the restaurant, I don’t think anyone realized I was in labor—except for our waiter, that is, who looked a bit weirded out whenever I stopped talking to quietly breathe through a contraction.

Now, compare this to when I was laboring with my first child, Micah.  I was screaming at the top of my lungs for the duration of every contraction, while my husband (who came up to check on me often) was downstairs with our contractor trying to finish the renovation on our house (See the full story here).  Only to find out, once we got to the hospital, that I was just 1 cm dilated.

So, what made the difference?

For starters, this was my second baby, so I think that certainly had something to do with it.  However, I believe there was also something deeper happening.

In the weeks prior to going into labor, I was brushing up on my old birth plan and going over techniques I wanted to utilize while giving birth.  During the process, I came across an interesting book entitled “Childbirth Without Fear.”   I had heard about it when I was pregnant the first time around, but never thought to read it.  And although things turned out great with Micah (read that birth story here), I wish I would’ve read this book much earlier than I did.

Well, the primary premise of this book is that labor is supposed to be exactly that—labor, or hard work.  Not painful.

I know what you’re thinking.  I found it difficult to believe as well, especially after having gone through a painful labor before.  I began to question if this guy, Dr. Grantly Dick-Read, a British obstetrician and natural childbirth pioneer, knew what he was talking about.  Given that he made such huge claims, I figured I would read it to see if he could back it up.

Now, I won’t rehash the major details of the book, so if you’re interested feel free to check it out. I’ll simply mention the parts that stood out most to me.

If you come from a faith-based background, you may be familiar with Genesis 3:16 where God says to Eve “I will greatly multiply your pain in childbirth, in pain you will bring forth children . . .” This verse was one of my primary objections to why Dr. Dick-Read’s argument couldn’t be true (that and the fact that I had previously experienced a painful birth!)  Well, he actually addresses this in the book.

The Hebrew words that would describe pain are “ke-iv” (meaning pain), “tzaar” (meaning sorrow), and “yesurim” (meaning anguish).  However, the word used in the above verse where it is translated “pain” is “etzev.” Depending on the context in which it is used, “etzev” can mean labor, anxious, or perturbed, but nowhere in scripture, with the exception of this verse, is the word used to describe pain.   He argues that through translation, likely influenced by the translators’ belief in the pain of childbirth, the word has been stated as “pain,” however this was not the original author’s intent.

Take it or leave it as you will.  I, however, did find this explanation helpful.

Other things that stood out to me in the book was the idea of visualizing the end goal. Labor does have an end point—that is, seeing your beautiful baby.  As my contractions got more and more painful, I would breathe through them, and imagine myself holding my baby girl.

Lastly, breathing was key as well. Thinking about breathing correctly, which is discussed in the book, was super helpful in placing my focus on the right things.  It gave me direction as I labored.  Things that also provided direction were keeping the lights low (I had dim star lights hung in the delivery room), playing peaceful music, and having verses written on post-its around the room.

These were all things that helped me face childbirth without fear, but I imagine it might be different for everyone.  Hopefully by sharing, it’ll be helpful to someone else!

Be sure to tune in next week because I’ll share the details of how the birth actually went, and whether or not I was able to experience a pain-free birth!

Regarding the idea of childbirth, what are you most fearful of? If you’ve given birth before, what helped you through it?

One thought on “Childbirth Without Fear, pt.1”